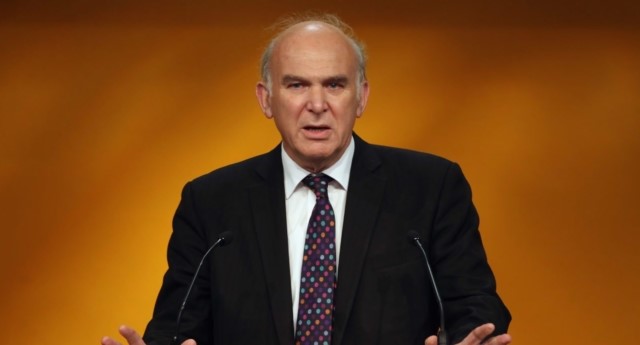 Our Leader, Vince Cable, sets out a  powerful Lib Dem view on LGBT issues in PinkNews which is especially relevant following the Trump declaration on trans-gender soldiers

It had been my intention today to write my own blog about Liverpool Pride and the fact that Liverpool Lib Dems will be out tomorrow on the march and with a stall in the marquee for Liverpool Pride. However, our Leader, Vince Cable, has done a better one than I could ever do in an article for PinkNews. Therefore, I briefly set out my beliefs and live the heavy lifting to the Boss!

Liberal Democrats have always been in the vanguard of gay and transgender rights and were the leading force behind the full equality which same sex marriage was brought about in the time of the coalition government. Who people love is a question of the heart and inclination not law, politics or religion. As a liberal I have always believed that people have the right to lead their own lives in the way they want to lead it providing it causes no physical problems to anyone else and is within the broad parameters of human rights and consent for all concerned.

In my 50 years in politics there have been many improvements in the way society treats LGBT issues. Not least is the fact that homosexuality is no longer an offence. Society as a whole welcomed the same sex marriage vote in the Commons. The same parameters for ‘decency’ now apply to all sexuality and quite right too. But underneath the surface of a ‘liberal society’ such as ours there are still people to whom people of the same sex loving one another is an abomination.

Every year at Pride a small group of far-right theologians will make their stand with their ineffectual banners threatening the wrath of God on those who according to their theology God has created. They don’t bother me. It’s when people with such abominable views not only get into positions of power but use that position to try and enforce outdated social beliefs.

Step forward the ever-loathsome President Donald Trump.  This draft dodging President has decided that trans gender people cannot serve in the American Armed Forces. Fortunately, the Pentagon has said it will ignore the President! Personally, I don’t care who is prepared to die to defend me if the chips are down. Thank goodness that people of all orientations, faces and sexualities are prepared to do just that. But why should I expand on that? Our new Leader, Vince Cable has an article in PinkNews today which points out that having a loathsome toe rag like Trump in position at least exposes the underbelly of filth which still exists in some minds in the Western World.

I am reproducing in full, with thanks to PinkNews, the article.

PinkNews Exclusive
It is half a century since homosexuality was decriminalised, at least in part. And it is tempting to look at it in that light, an historical event, and celebrate how much more liberal society has become. But President Trump’s re-introduction of the ban on transgender people in the US military this week should shake us out of any such complacency: the battle for LGBT+ rights is a battle that is far from won.

The period that saw the introduction of the Sexual Offences Act of 1967 left a powerful impression on me. It was around this time that I returned to the UK from Kenya with my now late wife, Olympia. She was Indian, and we arrived in a Britain snarling with the racism of Enoch Powell’s notorious “rivers of blood” speech. Intolerance was not merely tolerated by the state, but enforced by it, with immigrants, women and of course members of the LGBT+ community discriminated against in a way that is hard now to fully understand.

But it was also a time of social change, even ferment. My colleague David Steel piloted an act that legalised abortion that same year. And gay people could finally have sex without fear of prosecution (provided they were both 21 or over, and it was in private).

Looking back, the sheer level of bigotry is shocking. Even many supporters of the reform referred to homosexuality as a “disability”. By 1974, the number of arrests for gay “offences” had actually increased. It was not until 2001, after a defeat in the European Court of Human Rights, that the Labour government was forced to repeal the criminalisation of “homosexual acts”.

The campaign for equality under the law has been taken up by figures across the political divide, but I am proud to lead a party that has always been at the forefront of that fight, and not merely because one of the men who went on to found my party – Roy Jenkins – was the Home Secretary who helped ease the 1967 private members bill onto the statute books.

We were the first party to commit to equalising the age of consent, to have LGBT people serving in the military and to legalise same-sex marriage. Plus, you could throw in gender recognition, PrEP on the NHS, ending the spousal veto, as well as inclusive, appropriate sex and relationship education, the offering of asylum to vulnerable LGBT+ people, and the ending of deportation to countries where minorities face persecution.

I was particularly proud recently when the Liberal Democrats forced on the government a pardon for Alan Turing, who by cracking the Enigma code helped turn the war against Hitler. He effectively invented the computer – he was that significant a figure – yet committed suicide, apparently because he was persecuted for his homosexuality. Turing worked at the National Physical Laboratory in my Twickenham constituency, and I was delighted when a school there was named after him recently. The Lib Dem hope is that by gaining a pardon for such a great British figure, the government will now feel pressured to pardon the 75,000 others prosecuted for “homosexual acts” (49,000 of whom died having been branded criminals). That campaign continues.

The 1967 Act should not be seen so much as the culmination of a long campaign as an important step on a long road. The Trump decision is far from the most egregious example around the world of how people can be treated if they don’t fit into the idea of other peoples’ norms.

Even in this country, bigotry is still well and truly will us. My colleague (Lord) Brian Paddick went on radio this week to mark the half century anniversary of the Act – and he, as a gay man, was then subject to online abuse. My sense is that younger people are hugely more accepting of diversity than those of a generation ago. Indeed, they seem to understand instinctively that diversity should be celebrated. But there are still shocking examples of young people being bullied or suffering depression because of their sexuality. It is incumbent on all of us to make their lives better.

You cannot emphasise enough how much more liberal Britain is today than it was half a century ago. And because of that it is a much better place, where people are freer to live according to their own natures and desires. Through education we can become aware of our own possibilities, and celebrate the different life paths of others.

But as those campaigners for gay rights reminded us, there are battles to be fought on sexuality, gender and race, as the recent shocking increase in hate crime reminds us. And I am increasingly troubled by problems around generational unfairness.

We live in a Britain that is fairer, kinder and more accepting than the one I returned to half a century ago – but be under no illusions, there is much more work to do.