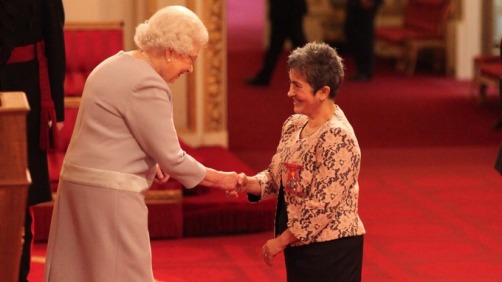 Cllr Erica Kemp CBE with someone even more famous!!

Erica finishing her term of office will have two main effects for me.
Firstly getting around the City and particularly Allerton Road will be a lot quicker and easier. Most of my trips have been regularly interrupted with total strangers coming up to me and saying things like I met your wife last yesterday/last week/last month. She is “such a lovely person/friendly/ thoughtful/welcoming”. I, naturally, agreed with all these comments and modestly accepted the credit for having been able to snare as my wife such an object of virtue!
Secondly, I will not feel guilty about not having done much to look after her allotment whilst she has been busy. Fortunately she has had a lot of ‘allotment buddies’ to help her. I don’t like gardening and I have felt guilty about my lack of attention down at Greenbank. But I have been busy too!
As I remarked at the start of her Mayoral year I have served under a lot of Lord Mayors – 32 to be exact and I have never known a bad one. Lord Mayors are at their best when they play to their strengths and not trying to be like the last Lord Mayor.
Erica has certainly played to hers. She is a naturally gregarious and friendly person and that has shown itself in the comments that I have received about her. She chose her four charities for particular reasons and has both raised money directly for them and helped them with their own fund raising activity. But more than that she has helped all four of them increase the number of volunteers that help them. This culminated in a volunteering day at the Town Hall when more than 300 people signed up for a range of charitable activities on that one day.
What has surprised Erica and I seen through the eyes of a Lord Mayor is just how much community activism there is in this City. We have seen so much of it in our combined 54 years as councillors but even the most observant councillor only gets a feel for the goodness of Scousers under the surface. Most people just on with doing, helping, serving others without any desire for a reward – just wanting to do something for others.
When I asked her what the key events she had attended they were many and legion. Of course she had three giant puppets arrive near the start of the year. She had real empathy with the Grandma as she is a Grandma herself. At the end of her year she hosted 3 giant ships – the Cunarders. On both occasions seeing more than 1,000,000 people in the city. She spent much of her time at those events not with the names and the celebrities but out on the streets meeting and greeting (and having her picture taken) with the people of Liverpool and those who had come to visit.
In the middle, of course, she went to see another Queen Elizabeth II, who presented her with a well-deserved CBE not just for the work that she has undertaken locally but the mentoring and support work she has undertaken nationally.
I also realised how much the Lord Mayor depends on their family to rally round at this time. This does not apply to me because I am a full on councillor anyway but it does apply to the rest of our family. From Rachel who was not able to do as much as she wanted as Lady Mayoress because she became pregnant and gave us a lovely grandchild in April. To Eva our 5 year old granddaughter who cannot wait for Grandma not to be Lord Mayor so she can come for proper sleep overs and play times!
Being the centre of attention has not always been the easiest of things for Erica to do. Over the year however she has blossomed. We are going to have to fight for the opportunities to give grandstanding speeches now! She dealt with this by just seeing people face to face and treating them and talking to them as individuals. They responded to it.
I am inordinately proud of Erica and what she has achieved in 22 years as a councillor and one year as our Lord Mayor. I hope that you will agree with me that she has done our City proud. I know that I join with her and most people in Liverpool in wishing Cllr Tony Concepcion the best of wishes as he starts his year in office. In the meantime Erica will be back on the allotment tomorrow weeding the strawberries and planting the beans!

1 Response to In praise of Cllr Erica Kemp CBE …Part 4!