The fight for Caldies Park – round 22! 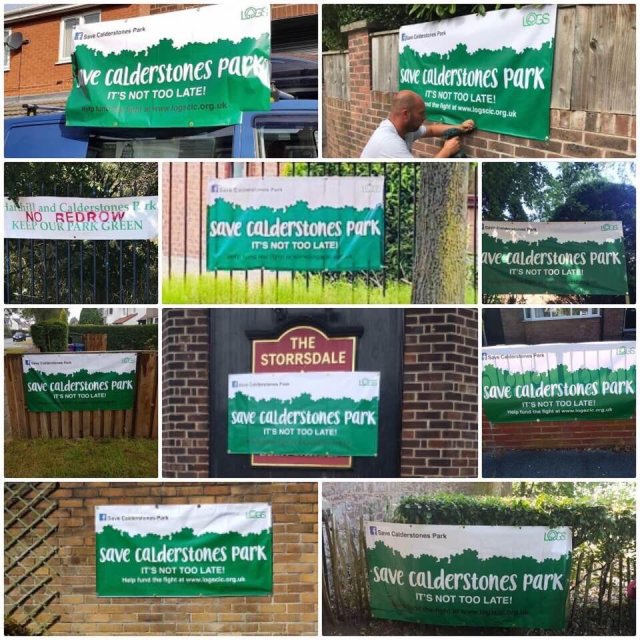 Banners are going up all over South Liverpool as the community rallies to save part of our much loved park from developers, Redrow Homes. On Saturday the campaign raised more than £2,000 for our judicial reviews against the Council’s planning decisions.

We have noticed in the past few weeks that some Labour councillors have broken ranks with the Mayor of Liverpool and have made clear that they do not feel that there is a need to build on Harthill and Calderstones Park. That is also the decision of the Riverside Constituency Labour Party.

It had already been our intention to call an Extraordinary Meeting of the City Council to try and get the Council to reverse its daft decision to build on 13 acres of the Park which is known as the Harthill Estate. We have now written a motion which recognises the valuable contribution that Labour councillors could play in chucking out this very bad idea.

This is an incredibly bad idea. Financially, the figures don’t stack up. They could get some housing on the site quickly and without offending the community by developing Beechley House for 2 bed apartments. The Riding for the Disabled Stables Committee are confident they could get grant funding for the existing premises easily and that is there preferred option. The model railway could stay in situ and support could be given to them for improving their facilities.

If you care about the Park please contact your local councillors to try and get them to support us. We can all be contacted by e-mail in this way. Firstname.lastname@liverpool.gov.uk. Don’t bother with Lib Dem councillors – we know how we are voting!!

We, the undersigned members of Liverpool Council requisition an Extraordinary Meeting of Liverpool City Council to discuss the following motion.

Council notes that more than 23,500 local people have signed a petition to oppose the sale of the Harthill Estate section of Harthill & Calderstones Park to Redrow Homes.

It welcomes the fact that Riverside Constituency Labour Party and other Labour councillors have now joined the Liberal Democrat and Green Parties to oppose this move.

It believes that here no financial advantages to be gained from a sale which adversely affects the environment of Liverpool.

It requests the Elected Mayor therefore to: