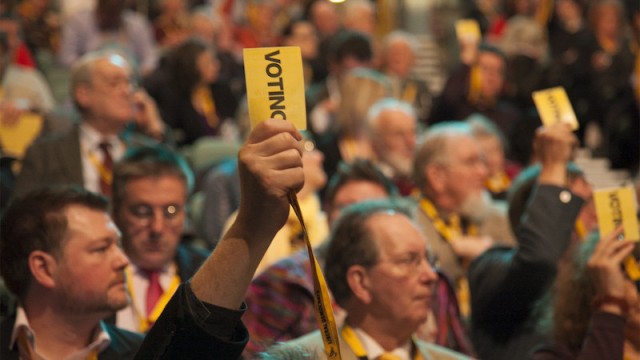 Every Lib Dem Member  can vote on policy at our national and regional conferences. That’s why there will loads of us invading Bournemouth this weekend

Yes, it’s that time of year again. The Party Conference season is with us again and as usual the season is started with the Lib Dem Conference which is meeting in Bournemouth. I understand that this will be a bumper year for delegates. This is hardly surprising as we have more members than ever before in our history. Many Liverpool delegates, however, have decided that the trip to Bournemouth is too long and are saving themselves for the Spring Conference which will be coming to Southport next year.

In many ways, as with most Party Conferences the agenda within the Party is largely none contentious. In fact, the most heated discussion is likely to be not if but how we oppose Brexit. The debate will centre around whether or not we should just oppose it or whether we support the existing policy as laid out in our manifesto that we should call for a referendum on the terms of the deal that has been negotiated. There will be no debate about the substance of Brexit because unlike the other Parties there is almost total unity on the issue.

One of our first debates is about the natural environment and how timely this is. It is coming with days of two super hurricanes laying waste to parts of the Caribbean and the South-eastern USA. Donald Trump still denies that climate change is manmade. No-one else thinks anything else except a variety of self-blinded or self-interested people who think that they know more than 97%+ of the scientific community. Indeed, some of these people think that the world was created some 6,000 years ago and that man and the dinosaurs co-existed.

Our motion does not just warn about or bleat about the consequences of climate change but sets out hard and deliverable actions to slow and down and then prevent it. We need changes in agricultural policy, transport policy, housing policy and legally binding targets for bio-diversity. The World is in the last-chance saloon and we must act now.

The debate about Grenfell Tower is the one of most interest to councillors. We have to consider the problem in two parts. Firstly, what caused the problem. Here we have to concede that the fire was not necessarily the Council’s fault. The building safety checks have been privatised and research into materials has lagged well behind the development of new building materials and techniques. It is the aftermath of the fire where the Council is clearly at fault. The Council was incapable of taking any action for at least 48 hours and even then had to depend on other councils just coming in; ignoring them and taking charge of vital services to look after the homeless; wounded and destitute.

Kensington and Chelsea is a pariah council. When its new Tory Leader tells the World that she has never been in a tower block in her own Borough you can see it all. This was a wealthy council who chose to bribe the electorate with its own money and no councillor should seek to defend them. Fortunately, they will now be getting a new Chief Executive who is one of the best in the business. I have no doubt that Barry Quirk will be supported by the Government as he seeks to pout right the blundering incompetence of the Tory Council and its staff.

I will, as usual, be busy on the fringe of the Conference. Most outside observers think that the Conference is what happens just on the Conference floor in front of the TV cameras. This is just a small part of the event. The Lib Dems, in particular, have a huge number of training events and fringe meetings. Then, of course, there is some serious drinking and plotting to be done!

I will be speaking at three of these fringes. The first is at a discussion to celebrate the 50th anniversary of our Councillor’s organisation ALDC. I will be discussing the role of community politics in the life of a councillor. This is very important to me as I believe that involvement in, with and through the community is a vital part of the work of a councillor. The least important bit is pontificating in the Council Chamber. I will be following my old friend Lord Greaves of Pendle who, unbelievably, has been a councillor for even longer than me.

The other two are about the health service and especially mental health. I will be attending a small, closed meeting with the Royal College of Psychiatrists looking at the problems of mental health and the fact that the mentally ill are still not treated as well as the physically ill. I will then be doing an event with the Community Pharmacists Association highlighting the fact that almost 40% of the drugs issued by the health service are wasted. That’s £8 billion, often literally, going down the toilet.

The highlight of the conference is, as ever, the Speech by the Leader. I won’t be there for that as I have to leave early to attend a funeral. This week I have attended two meetings with Vince and have a good idea what he will be talking about. Europe will of course be part of the speech but new proposals to replace student loans with a graduate tax; thoughts about housing and education and social justice will also feature heavily.

I am really looking forward to it. The opportunity to meet old friends and to have some real discussion about policy always charge my batteries. Unfortunately, all that may well be blown away on Wednesday night when Labour Councillors will again be bleating and moaning in the Council when there are many things that they could be doing to take on the problems of Liverpool. I suspect the debates will not be as rational and orderly in the Council Chamber as they are at Conference.