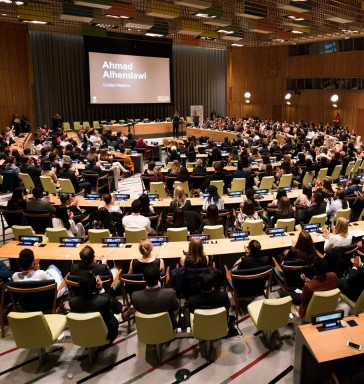 Last Year World Merit took young people to the USA and the UN to discuss global issues. This year they will be in Chester and Westminster taking the ‘truth to power’

Sometimes good things come out of tragedies. One of the greatest post-war tragedies for Liverpool happened when 96 people, many of them young, went to watch a football match at the Hillsborough Stadium in Sheffield and died there. The good that came out of it can be seen in their home city where the whole community came together and stayed together supporting the affected families and fighting for justice over the decades for those who died or were otherwise hurt.

One young man lived through the tragedy of the pens and started to go off the rails. His work in school in Halewood started to decline and he was brought to task by one of his teachers who devoted an afternoon to a conversation with him and tried to help him set his path through life onto a firmer footing. “What do you want to do?”, she asked. “I want to become a writer”, replied the young Chris Arnold. Fortunately, or perhaps unfortunately for him his teacher, Mary Wilson, was his English teacher and she didn’t think he would make it and even if he did he wouldn’t make much of a living out of it!

They created a simple life plan instead which involved Chris going around the World, making some money and by the time he reached 40 having enough money to live on and being able to settle down seriously and write bad books! Many of us dream of such things but Chris actually achieved it. At the age of 40 he had two successful Liverpool based companies which send young people around the world on exchanges and to American Summer Camps. He was married, had two lovely children and could have started on the bad book writing. Fortunately, he didn’t. He decided to use his business experience and knowledge of young people to establish World Merit instead.

I became involved with World Merit two years when I got a letter from Dame Lorna Muirhead the Lord Lieutenant for Merseyside asking me to go and visit World Merit and help them. A request from Dame Lorna is a command in any other language so I went!

I found a deeply impressive charity/ social enterprise which was trying to do what many people think is impossible. It involves young people both in their own communities and in the work of the United Nations. The United Nations established 17 sustainable development goals in 2015 which cover all aspects of the public and private needs of the people of the World. Although seen most often as targets for developing countries they apply just as much in the developed world. There are huge problems of relative poverty, illiteracy, poor health and gender inequality in sub-Saharan Africa and in the UK; in South East Asia and the United States of America.

World Merit works by involving people in working in their own communities using an IT platform which gives them ideas and sets them challenges. It also awards points to people who do good things. It predominantly works with young people aged between 18 and 25. You can find out more about World Merit at www.worldmerit.org.

At least once a year World Merit brings young people together from all over the World to jointly look at challenges which can be made to the UN, Governments and Councils to deliver practical programmes for alleviating global problems from the viewpoint of young people. You can find out more about this programme at http://www.merit360.org.  This is a parameter that is often lost by legislators and Mayors who tend to be older. In some countries 50% of the population is under 20. It is their future we are playing with.

This is no holiday for them. They have had to raise the money to come. They have had to work with other youngsters from around the globe in different time zones to develop ideas for one of the SDGs. They will spend most of their time working up their ideas and looking at ways in which they can influence Mayors, journalists and the wider civil community. At the end of the time in Chester they will move to London. Firstly, they will present their ideas to appropriate businesses and organisations to fine tune them. Then they will present them to the ‘Great and the Good’ in the House of Lords on September 5th. But the final day of the programme is only the first day of their project. They will then go and start working on the implementation of their project in their own communities and countries. They will also ‘market’ their project within the World Merit global platform and encourage other young people to rise to the challenge.

Sadly, we are not getting as many young people to the event as we would have liked. The event had to be moved from the USA to the UK because of the problems caused by Trump and his visa changes. Ironically the UK border control agency was just as bad. Almost one third of the youngsters who have been beavering away at home were denied a visa despite our best efforts.

The cynic might say that these are small efforts which will achieve little in the face of monumental problems in many parts of the World. They are both right and wrong. Certainly, major items like climate change and poverty need Governmental laws and actions. But just imagine if everyone one of us did just one thing regularly to support one of those gaols. Perhaps we could help a child to learn to read and write; perhaps we could recycle more and encourage others to recycle; perhaps we could encourage more young women to come forward to take leadership roles in the face of hostility from men; perhaps we could go out and clean up our local beach.

I’m looking forward to the days that I am spending with the young people in Chester and London. I am personally working with a group looking at micro-finance something I already participate in at www.lendwithcare.org. I hope that I will be able to contribute to the discussion. I am absolutely sure that I will be challenged by what I see and the sheer enthusiasm of the young people. They say that an old dog can’t learn new tricks. Well I’m going to give it a go!!