The Shame of Childhood Poverty in the UK in 2017 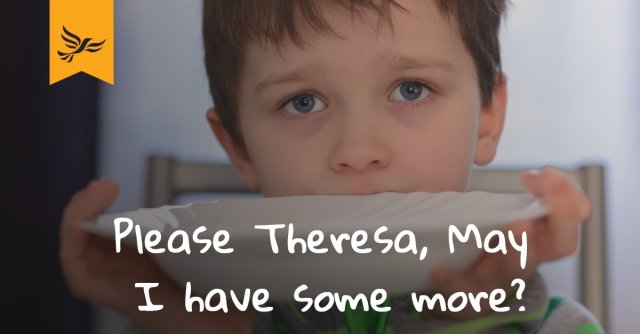 Do we really need to turn our Children into latter day Oliver Twist’s to get them the resources they deserve?

Last week I received a number of e-mails drawing my attention to a report by the Children’s Society about childhood poverty broken down constituency by constituency.

The figures for Wavertree Constituency were truly shocking:

There are 18,683 children in Wavertree constituency

33.0% of children in Wavertree constituency live in poverty (after housing costs), compared to a national average of 30%.

There are 3,300 children living in 1,900 families with problem debt in Liverpool Wavertree.

Based on the latest prevalence survey that estimates 1 in 10 young people aged between 5 and 16 had a clinically diagnosed mental health problem, there would be around 1,200 children this age in need of support in Wavertree.

Across Liverpool there are 2,522 children known to children’s services in Liverpool because of abuse and neglect.

These figures are shocking in a country which calls itself civilised and the sad fact is that they will get worse. The highly respected Institute for Fiscal Studies has received the proposals of the 3 main Parties and come to the conclusion that the Liberal Democrat manifesto is the one that will do most to reduce the gap between rich and poor. The main treason for that is that the Tories have agreed £7 billion of cuts to benefits to be achieved by 2020. Shamefully the Labour Party have refused to reinstate them. Only the Liberal Democrats have a fully costed plan to replace that desperately needed cash.

It’s why we will fight to keep free school lunches for children at infant schools which was introduced as an initiative by Nick Clegg. The Tories have announced an uncosted plan to give children breakfast instead at a cost of £60,000,000. When it was pointed out to them that each meal would have to be provided for 7p they withdrew the amount but kept the policy! Kids need food if they are to concentrate and study. Rumbling tums and then the consumption of the wrong, cheap food full of chemicals attacks children’s ability to think and progress as well as making life very difficult for teachers.

It’s also why schools in areas like Liverpool got a pupil premium from the coalition government to try and help children living in deprivation catch up on the education which will give them a good start in life. This money is proving to be effective in providing the extra support within the school setting which is more readily available within the home setting of middle class and wealthier families. Progress was made in reducing the educational gap across the Country. This is now threated by a Tory proposals to move money to wealthier areas. Basically the Tories are saying that the money should be made available on a per head basis without any recognition that some children’s needs are greater than others.

It’s why we are pledged to put an extra £1 billion into children’s mental health services as part of the £6.1 billion. If all children cannot be given the support they need at home they need to get help elsewhere. Too many children live transient lives in poor accommodation and without enough to eat. This obviously causes major problems with their mental health which if not treated quickly will create problems for them all their lives.

Its why despite all the furore over tuition fees for undergraduates more children from poor backgrounds were able to access university because of the greatly increased grants available to them. These, of course, were slashed in months by the Tories in months after 2015.

On top of all that it is now abundantly clear that this country will get poorer and that there will be less money for those in need of all sorts. The hard BREXIT being pursued by Corbyn and May will reduce the tax take, reduce employment, minimise wage growth and reduce the ability to progress up an employment ladder. Both Labour and Tories have tried to avoid the Brexit debate because they know just how bad it will be. So many promises being made by both the other Parties will come to nothing in a desolate post Brexit landscape.

Eradicating poverty, especially for Children, is a major concern for us. Our Country will only be a truly great country of we maximise the potential of every person in it. We cannot exists in a low cost, low economy world by diving to the bottom on wages, standards and conditions. Unless our children get a good start in life they cannot achieve their potential which means that the Country likewise will not achieve its potential. Putting money into the upbringing of our children is not just morally right but also economically sound. When morals and the economy go together it must be the right way forward.