The British response to terrorism? Carry on as normal 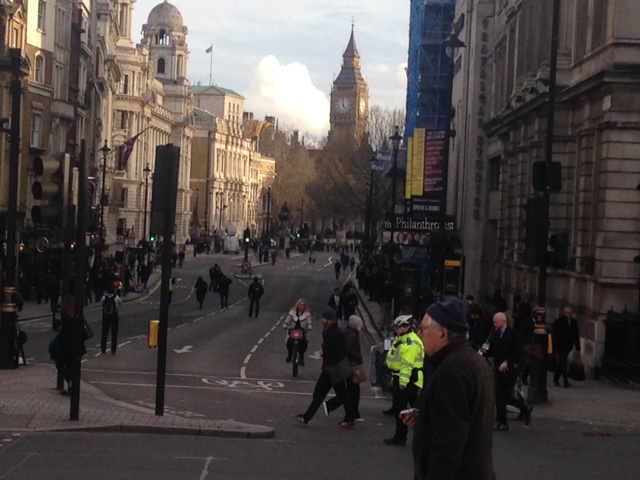 A picture I took of Whitehall at about 5 pm on 22nd March. Normally you can’t move for traffic near Trafalgar Square at this time

What a nasty piece of work Katie Hopkins is. I’ve only heard of her recently as I do not frequent the type of media where she contributes. I did, however, come across her today for something she contributed to Fox News, another outfit that I have little time for. Basically she claimed that London had been cowed by the terrorist attack on the Houses of Parliament yesterday. I don’t know where she was but I was just outside the exclusion barrier and it did not seem like that to me.

Clearly there was shock as we were only about 300 yards from the ‘action.’ Concern was expressed about what was happening. There was clear interest and sympathy were expressed about the potential victims and the fact that our Parliament had been attacked. But no panic and certainly no thought of being cowed by the action of one or many. London moved on not without heart, not without sympathy but it moved as it always does when problems beset it.

That, Ms Hopkins, is the British way. It may not suit your warped belief systems that we don’t panic; that we don’t carry on; that most of us will not be lured into racist and separatist views by the acts of one person. But that’s just the way that we are and have always been. Perhaps that was exemplified best by the fact that the emergency services fought to save the life of the attacker although they must have been appalled by his actions. That is what we do Katie Hopkins.

Today Parliament reassembled at the normal time. Of course it is true that they had tributes and silence for the dead and injured. Then they got on with the business of running a democracy as they should do. For most of us this will be a one day wonder. We will hope and indeed expect that lessons will be learned. But democracy is not always easy to physically defend.

On the one hand we need to protect our law makers and other decision makers who, for good or ill, with or against our wishes make decisions which affect us on a daily basis. On the other hand democracy cannot work unless it can connect at its heart with the people it serves. I have been in the Commons, Lords or Portcullis House 6 times this year for different events connects with local government and how we serve the people. On any day thousands of people visit Parliament either to participate as I do or to be tourists to see their MPs in action or just wonder and the beauty of the buildings. Nothing must prevent that from happening.

But for others the day will change their lives for ever. The families of the innocent dead will remember the 22nd of March 2017 for the rest of their lives. In 20 years’ time their families will be wondering what their kinsperson would have achieved if their lives had not been cut short. Every police officer will think about the dangers and perhaps give their spouses and children an extra hug as they set off for a shift from which they might not return.

My predecessor as Lib Dem Leader in Liverpool, Paula Keaveney, was caught up in this. Two of the Edge Hill students which she was taking to the Commons were injured and one hospitalised. OK they are fine and will recover. They will always think of the car running at them; they will always remember the time secluded in Westminster Hall as they waited to be allowed out safely. Will that turn them against democracy? Will it make them more determined to get stuck in and make our democracy work? Only time will tell.

I was appalled at the reaction of Donald Trump Jr in his criticism of the words of the mayor of London. Cities can be dangerous places. BUT British cities are nowhere near as dangerous as American ones. Here guns are still a rarity. Mass killings take place very infrequently compared to one a day in the USA.

We can never stop the type of event that happened yesterday. Unless you ban cars and knives people will always have the ability to kill and maim. Even then they can kill you with brick or a knotted scarf.

You can only do three things:

To some this will sound like wishy-washy liberalism. Guilty as charged! But I actually think that this what most people think. People like Ms Hopkins don’t really like the UK of 2017. They pine for an imaged world of 1917 when the UK was a great nation at the heart of an empire and where Johnny Foreigner knew his place. Those days are dead and gone. If you don’t like that Ms Hopkins go to America, become a full blooded Trumper but don’t try and spread you nonsense in this country or about this country.

Leader of the Liberal Democrats in Liverpool. Deputy Chair and Lib Dem Spokesperson on the LGA Community Wellbeing Board. Married to the lovely Cllr Erica Kemp CBE with three children and four grandchildren.
View all posts by richardkemp →
This entry was posted in Politics and tagged counter terrorism, Fox News, Katie Hopkins, London, Parliament, Terrorism. Bookmark the permalink.