Why I want to do things very differently 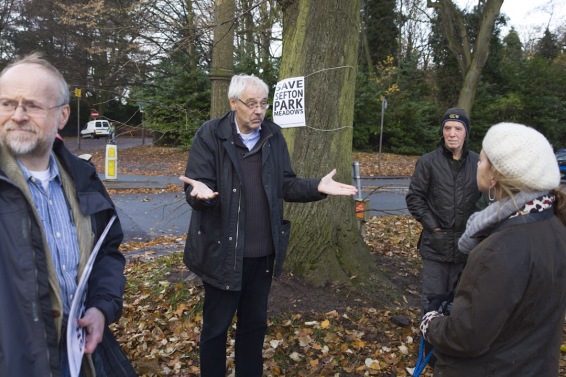 Out campaigning in Sefton Park. Just one of he many decisions where the Mayor is ignoring the wishes of the people of Liverpool

I’ve just had an extremely irate phone call from a long-standing member of the Labour Party here in my own Church Ward. He wasn’t mad at me but mad at Mayor Anderson. He believes that the Mayor is treating even his own Party members with contempt. This is a man of some standing in Liverpool, someone who I have respected for some time even though he is in a different Party. His offer at the end of the discussion was to help me in any way possible to win on May 5th. This was not my only discussion of the type today. I had another Labour member despairing about another issue in which he thought the Mayor was wholly out of touch with ordinary people when I was out door knocking this morning.
One of the reasons that I opposed the introduction of an elected mayoralty was my belief that it it is wrong to put all the political power of the City into one pair of hands. It is far too easy for that Mayor to become and Emperor. An emperor whose courtiers crawl and give him then information that they want and in which they look to him for their own prestige and position.
That is certainly what happens in Liverpool. Labour Councillors dare not put a foot out of line. After the Mayor vilified Erica and I for 20 minutes in his so-called, Mayor’s Statement one councillor came up to us and said “we’re not all like him you know!” That is true but when they don’t stand up to him they may as well be the same as him.
The same is true of the officers. I believe that in Liverpool the appropriate relationship between officers and members has been breached. Just like the councillors they do what they are told when they are told. They should exercise their discretion and act professionally to hold the Mayor to account. Clearly they do not do so.
So we have someone who gets his own way and against whom very few are prepared to stand and challenge. We are currently in the last stage of preparing our manifesto for the May Mayoral and Council Elections (and don’t forget there is also a Police Commissioner Election where Chris Carubia a Wirral Councillor is standing for the Lib Dems).
This is what we want to say in that manifesto about how the Council should be run:
Liverpool, currently has a highly centralised system of local government with all power vested in one person – the Elected Mayor. There is no effective scrutiny of what the Mayor does and the Mayor makes few efforts to meet the taxpayers of the City.
Liberal Democrats will:
• Seek to abolish the post of Elected Mayor as soon as is legally possible after full discussion with the people of Liverpool whose decision it should be.
• Return the Council to a simple committee system of 7 committees plus legally required committees to allow all councillors a hand in the decision making process and to allow the maximum access of the people of Liverpool to decision makers.
• We will reduce the top levels of highly paid council staff by deleting the post of Chief Executive and create a new city manager.
• We will slash the use of consultants currently being employed, at great expense, to fill gaps in the council’s management.
Whilst an elected mayoralty exists:
• The title of Mayor will be changed to Leader of the Council
• The Leader of the Council will hold monthly ‘open house’ public meetings at the Town Hall to answer any questions from any citizen, organisation or business based in Liverpool on any aspect of life in the city.
• The Leader of the Council will hold fortnightly advertised sessions in communities throughout the City.
• All of the Select Committees of the Council will be composed of 50% none-voting members to maximise expertise, knowledge and interest from amongst Liverpool residents and organisations.
These proposals will mean:
• That all councillors will be involved in policy making and not just one.
• That members of the public will be able to know where decisions get made and can go along and lobby the councillors making the decisions.
• That the Leader/Elected Mayor is forced out of the cocoon of council offices and made to face and listen to the people of the city.
Lib Dems believe that a more open and accountable system will mean better decision making. It will mean that everyone can influence the decisions of the council and not just a charmed few in the inner circle of the Leader’s office and cronies.Next year under Labour it might get worse. We may have two Labour Mayors both of whom have their own courts and cronies. Frankly it doesn’t bear thinking about.
Today the National Taxi Drivers Alliance have said that they are supporting my campaign. Two members of the Labour Party have said that they are going to vote for me and one wants to help me win. Why don’t you make that decision as well? Only the Lib Dems in Liverpool have the experience and knowledge to break the mould of bad Liverpool politics. On May 5th it’s me or Anderson. If you want to help me you can offer to help and keep in touch with my campaign at http://www.richardkemp.org.uk.