If only every UKIP member had been in Church today 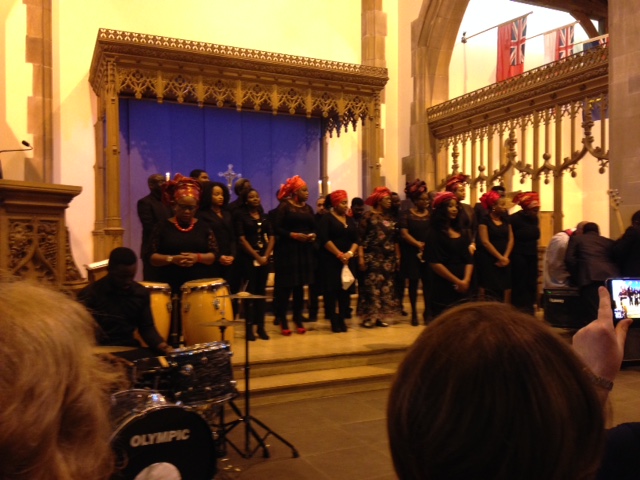 As a liberal I don’t really believe in compulsion. However as I sat in the Annual Anglican Civic Service this morning I really wished I could make very UKIP member in Liverpool attend today’s service and others like it.

Our Lord Mayor’s theme this year has been diversity. Last year Erica’s theme was volunteering. They both made their civic services reflective of their term in office. Diversity was much in evidence today both in the performances and in the makeup of the congregation.

The first music was from the Church’s own choir. We then sang a traditional Christian Hymn. Then we had a most beautiful dance from a young Indian Women. After more traditional C of E stuff we then had an African Church Choir singing both one of their traditional hymns and then a song about faith in Liverpool created for the event. Lastly we sang two verses from the National Anthem. The first standard one but the second the
I know some people, don’t like our National Anthem but is there any decent person who could disagree with the last 4 lines of today’s second verse?

Lord, make the nations see
Justice and harmony
And form one family
The wide world o’er

This was, of course theme of the sermon by the Rector of Liverpool Rev Dr Crispin Pailing. His theme was all about diversity and the fact that “difference isn’t dangerous”. But that is only true amongst people of good will and good intent. Too often people see different and see better or worse. “They’re not like us, so they can’t be as good as us”. Or even worse, “they’re not like us, we must protect ourselves from them”.
As I looked around the Church and then the Town Hall where we went after the service I had no need to be afraid of anyone at the service or reception. Different yes. Some of them were women and that’s different from me! There were people there from Asia, Africa, the Caribbean. The Honorary Consuls for the City had mostly come in their national costumes and there were a number of children in the national dress of other European Countries. So it was easy to see the differences BUT what was more important it was possible to feel the similarities.
Above all every single person there was a Scouser. In my view there are only two types of people. Those who were lucky enough to be born a Scouser and those who wished they had been born a Scouser. Well both Erica and I are blow-ins. She came after her father died when she was five. I first came to Liverpool when I was 21 days old but only moved here when I was 21 years old. Liverpool has taken us both in although some of my political opponents might say I have taken Liverpool in!
Today’s diversity was nothing to be feared but very much to be welcomed. We are a port city. Goods flow through our City from almost every Country in the people. People come to our Coty from almost every Country in the World. Some of them decide to stay. They bring their own cultures which they still hold dear and graft their culture on to that of the host community. That isn’t weakening an English Culture its creating it.
What we are today has been created by successive waves of immigration. Our Country has been physically invaded in the first millennium from Scandinavia and at the start of the second Millennium from France. From 1600 onwards people came to this Country because it offered them a chance. They could practice their religions and their beliefs relatively freely. They could practice their trades and earn a living. They made the UK one of the strongest Countries in the World – it still is for all its faults.
And that’s why I wanted UKIP members to be present in that Church today. I wanted them to see the strengths of migration and the skills and talents that it has brought our City. I wanted them to understand that the UK in general and Liverpool in particular should not be cowering away from Europe and the rest of the World but embracing Europe and the rest of the World.
Keeping our Country strong cannot be achieved by building real or metaphorical walls to keep ‘them out and us in’. Our strength will be manifest if we engage Europe and the rest of the World. If we go out and take our ideas on justice and democracy out to them and build a World.
I am very proud of our Country. It hasn’t got everything right in the past and it isn’t getting everything right now. But it is still one of the best places in the World to live. As I go around the World for United Cities & Local Government I know how much others respect our Council and our ways too.
That’s why I have the confidence to say I want my Country to be a World Leader not by force of arms but by force of argument. If we want things for our Country to be different to be better we need to ensure that things are different in the rest of the World are better in the rest of the World.
I am not a little Englander like UKIP and the more thuggish varieties of right wingers like the BNP or EDL. I and my black, brown and yellow skinned friends from all over the World who are now Scousers know that this is not the right way. Everyone at the service today was a BIG ENGLANDER! We will face the future with confidence and not fear. If only UKIP had been with us today they might have thought of coming out of their bunker and joining us in our comfortable, multi-racial, multi-cultured and bloody marvellous city.