An outrageous attack on democracy in Liverpool 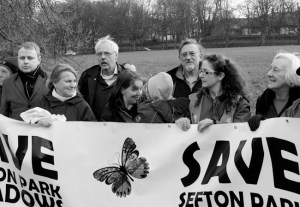 This morning I visited Sefton Park Meadowlands with my colleague Paul Childs and joined the Save the Meadowlands campaigners who are fighting to keep this valuable public open space out of the clutches of developers. We particularly met today because on Monday the council will totally ignore the wishes of the 7,200+ people who petitioned the council to keep the land and the 1,200+ people who wrote objecting to the loss of public open space and will begin to market the site.

We turned up today to ensure that any developer who wants to develop this site will know that it will be a long, long time before they can hope to bring in their diggers. Inside and outside the council and within the planning system we will use every trick in the book to slow things down and add massive costs to the any developer rash enough to want to take on the people of Liverpool.

But there have been some funny goings on down at the council as we approached the sales date:
Firstly all the posters and banners were removed from the site. Furthermore the campaigners were told that if any more were put up the Council would remove them and charge costs to the campaigners. What a gross attack on the rights of people to peacefully protest about decisions being taken by the council. When I enquired why this political act had been taken I was told that the council had received lots of complaints from members of the public the previous weekend. So my thinking cap went on. Two weeks before the council wants to sell the land and members of the public suddenly after 6 months don’t like the banners. I DON’T THINK SO!!!!!

So I enquired how many complaints had been logged on the council’s complaints and enquiries system. The answer came back that there were no complaints logged because the complaints had been made direct to council officers by e-mail. I DON’T THINK SO!!!!! How many members of the public would know which officers and what their e-mail address is? I then asked for some details of which officers had been contacted and when. A deathly silence has erupted from the council! Answer came there none! So I have issued a Freedom of Information request to the Council to find out. Isn’t it sad that a councillor cannot get replies from senior council staff?

Secondly, another lot of officers have been told, apparently by the Mayor, not to give me any information about the sales and development particulars for this site until the public get it next week. I know that the Mayor and some of his senior staff wish that I wasn’t a councillor but unfortunately for them I AM! Richard Kemp is not important but the fact that I am a councillor should be within a democratic system. I have a right to get hold of information as part of the scrutiny work that should be being done by all councillors of all Parties outside the cabinet.

Liverpool Council should be pleased that the Audit Commission has been effectively abolished. If this had not happened the Council would be the subject of a Corporate Governance Inspection so badly have the normal standards for democratic activity broken down with thin the Council.

So just for the record:

1. The Sefton Park Campaigners are not going away
2. I am not going away
3. We will ensure that Sefton Park will not be built on
4. A partnership of all sorts of groups is emerging in Liverpool to challenge the democratic deficit.

Leader of the Liberal Democrats in Liverpool. Deputy Chair and Lib Dem Spokesperson on the LGA Community Wellbeing Board. Married to the lovely Cllr Erica Kemp CBE with three children and four grandchildren.
View all posts by richardkemp →
Image | This entry was posted in Uncategorized and tagged Democracpy, Labour, Lib Dems, Liverpool, Sefton Park. Bookmark the permalink.

4 Responses to An outrageous attack on democracy in Liverpool